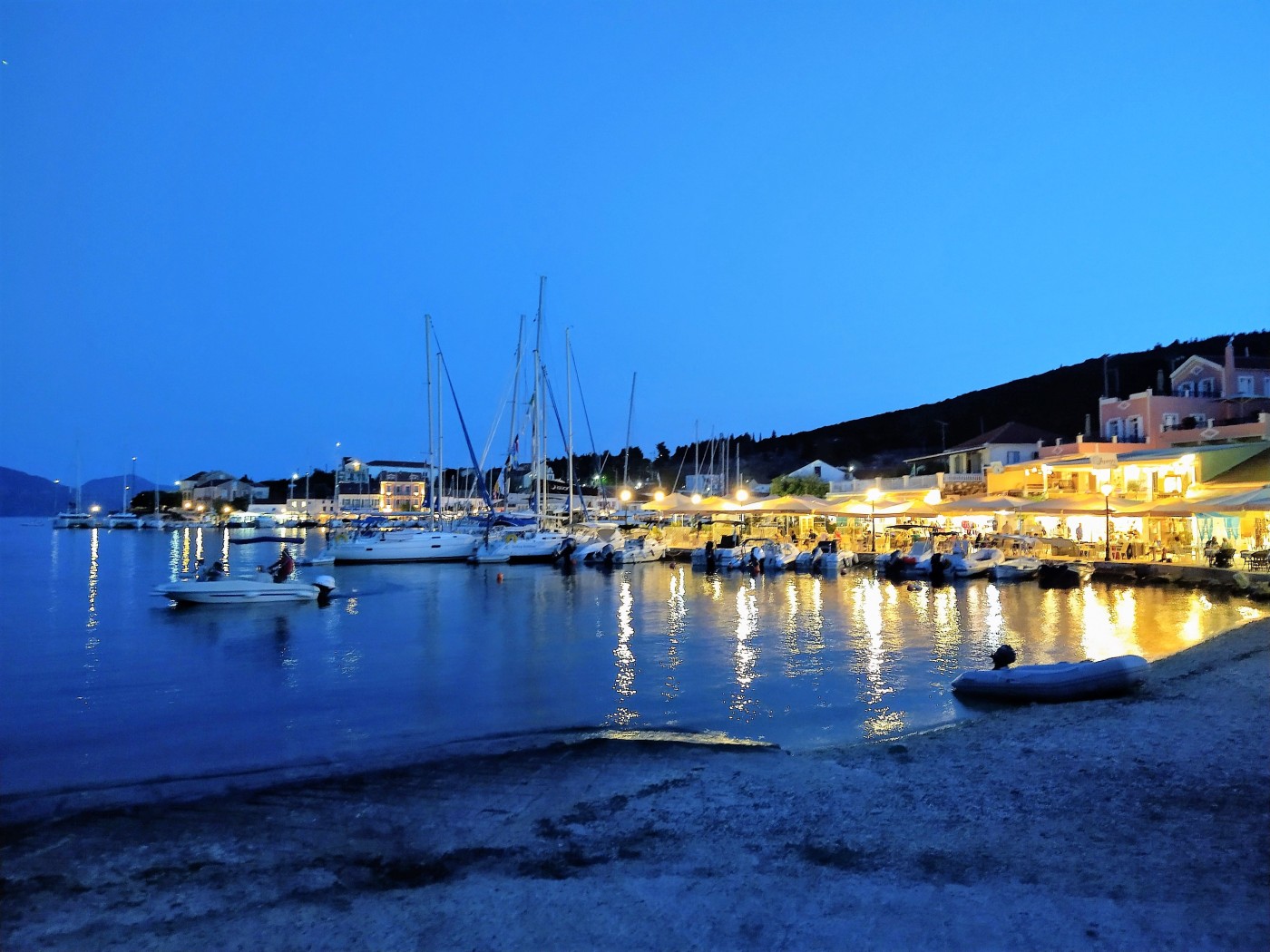 From Assos, we took a taxi to Fiskardo for the next week of our holiday. We stayed in Kalokeri Apartments and they were superb; modern, spacious, swimming pool, sunbeds, great views… you get the picture. Check out the video link below for the views of the vistas. It’s only two and a half minutes long. The apartments were roomy, well furnished and clean. The swimming pool was spot on, plenty of beds and well spaced out. Due to covid regulations each apartment had their own beds with their name on them for the duration of the stay. The small complex is situated up a hill outside of town, it’s about a 15 minute walk in. It’s a bit of a walk in the sunshine but, of course, because it’s uphill you get the great views. The apartments are on the Emplisi beach side of town which is a bonus. There’s a bakery/bar/coffee shop nearby which is excellent. The restaurant Mirella’s is nearby and that served super homemade food, with lovely views over the bay.

Whatever it was in the past, Fiskardo is now firmly on the itinerary of the yachting/flotilla holiday crowd. Understandably so, the harbour is a decent size and ringed with classy bars and cafes. With boats tying up directly on the same quayside (and around the bay) it’s got a super cool vibe (if you like that kind of thing). Again, the video makes the set up clear.

There are a few beaches to choose from in the area but our favourite was Emplisi. It’s not so much charming or picturesque; it’s simply gobsmacking. There’s no beach beds or umbrellas, but that only added to the rustic, unspoilt charm. As the beach is a mixture of sand and pebbles, the sea is as clear as a bell. Not a bell made of iron. Iron is opaque. You can’t see through iron. But a bell made of glass. The sea was beautiful. Inevitably, in such a beautiful spot, there has to be something to wind you up. Someone has to screw up paradise.

At the end of the beach, there’s a bar. Splendid idea… hot beverages… chilled drinks… tasty snacks… What could go wrong? Well, what could go wrong is the musical taste of the bar owner. He seemed to be a musical evangelist for 1970s prog rock, specifically the ones with lengthy guitar solos. All played plenty loud through cheap speakers. At the touch of a button, he turned heaven into hell. Okay. I’m exaggerating, but he certainly bugged me. So much so that one day we left to find another beach, and failed. We got lost. I put my headphones on and drowned him out.

There were times when some other people ran the bar, the music improved, and it was turned down. But the arrogance and bad taste of this bar owner scarred my experience of Emplisi beach, I’m sorry to say. Even if he had played music to my taste, it would not justify imposing it on others.

Anyway. On to the good stuff. The sea was lovely, and I even saw an octopus! Not a big one, I grant you. I didn’t feel threatened. There’s footage of it in the video. All a bit crap, but I was using a new camera in very shallow water. Anyway, it’s a beautiful place to swim, though not much variety in the fish (apart from the octopus). And the great white shark. (I made that up).

Food. We had breakfast a lunch in a few places, (Captain’s Cabin was yummy for Eggs Benedict) but I want to pick on two eateries to recommend. Firstly, there’s an excellent Thai restaurant in town called Lord Falcon. I don’t know why it’s called that and I certainly wasn’t expecting to find good Thai food in Fiscardo. Great flavours, generous portions, we went twice. On the Greek cuisine front, my favourite was Nikolas Taverna. Not just because the food was excellent (it was, try the Skordalia) but the view across the harbour was sumptuous. Nikolas Taverna is kind of ‘across the bay’, only a ten-minute walk, but slightly raised up. They made an effort to serve authentic Greek food beyond the usual tourist agenda. Tip top. And they played Greek music, not Emerson, Lake and Palmer, Led Zeppelin, or Genesis.

Fiscardo is a pretty place and rewards a stroll around. A walk through the woods to the Venetian lighthouse and 6th century basilica is very pleasant. Not that either monument is particularly gobsmacking, but ambling through the trees, along the pretty shoreline, ahh… well, it’s very agreeable.

I suppose I’ve been to lots of Greek islands/towns/harbours/ports over the years. I do love them. There’s a shared character, and yet they’re all different. Each has its own flavour. I’m thinking of the smaller places, not the big resorts or big islands. I find it hard to put my finger on quite what the appeal is. They’re not perfect in every respect, but they have ‘soul’.

Fiscardo is yet another appealing destination that Greece has to offer. ‘Mamma Mia’, ‘Captain Corelli’s Mandolin’, or ‘Shirley Valentine’? They’re all different, they’re all super.

If you liked my blog, there’s every possibility that you’ll like the comic novel I’ve recently published. As much as I enjoyed teaching, and respect those who do the job, there’s plenty to laugh at. I spent 30 years giggling 😊. It’s a bargain at £2.21 for the Kindle! Click on the image for the Amazon link.