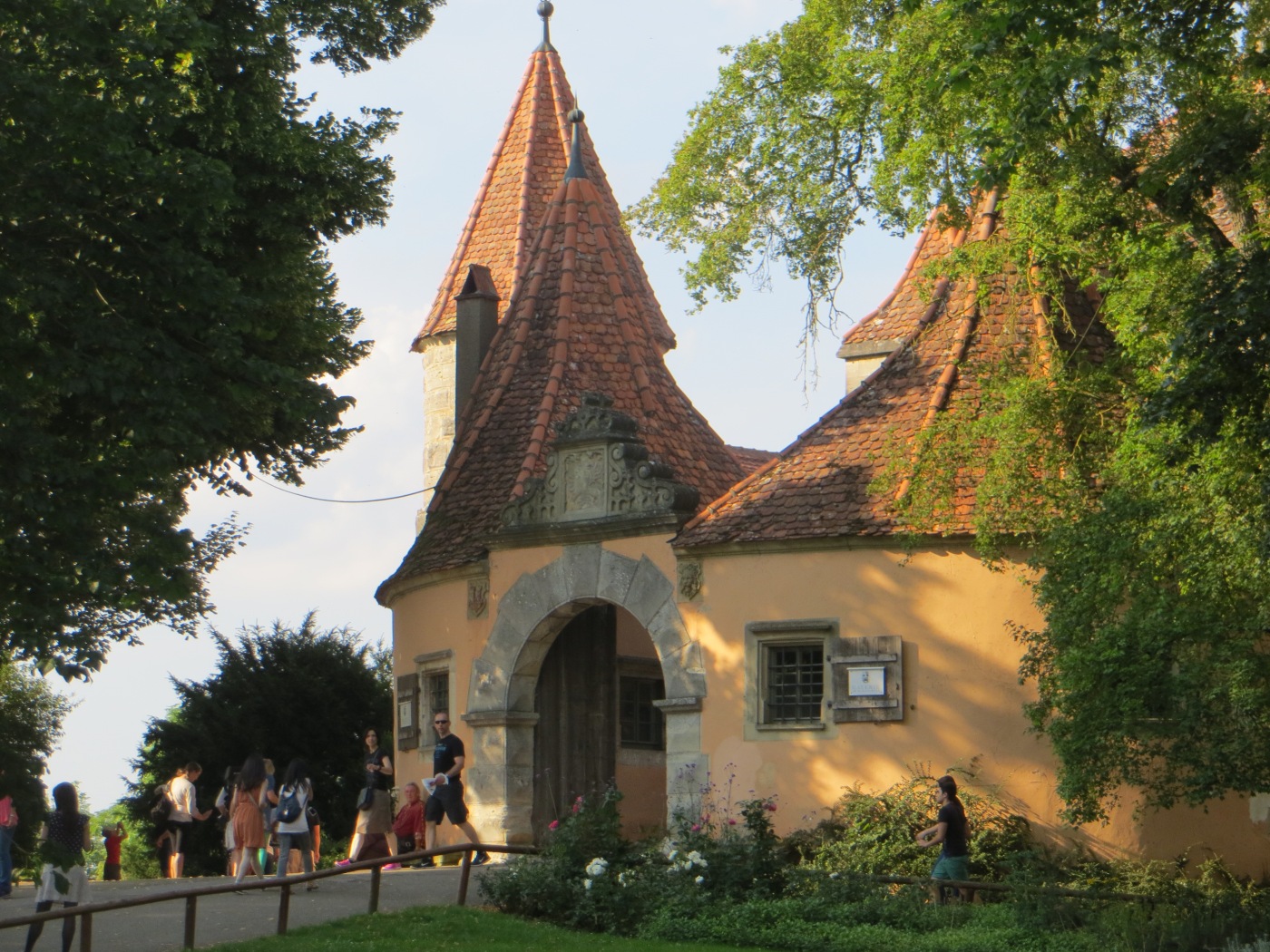 Rothenburg originally flourished as a stopping place on the silk road. It was the thirty years’ war, and later the plague, that decimated its population and brought financial ruin. They were so skint that they could not afford to renovate their knackered medieval architecture and were stuck in their ancient, timber-framed houses. The Rothenburgians thought their town was a worthless dump.

In the late 19th century, after a couple of hundred, miserable years, the ‘Romantic’ movement (led by Spandau Ballet and Duran Duran) re-discovered Rothenburg and decided the place was jolly nice and, effectively, a preservation order was slapped on it. In the 1930s, the Nazis too were smitten by the town and idealised it as the perfect Aryan home; it ticked their propaganda boxes. Modern urban development was set to bypass this enclave.

It survived the war because the Americans who were supposed to bomb it into oblivion also thought Rothenburg was just too yummy. Three American soldiers did a deal and the mayor of the town surrendered it, defying the orders of Hitler. That’s the history in brief and you probably think of Rothenburg as an alien place, but if you’ve seen Disney’s ‘Pinocchio’ the truth is it’s rather familiar; because the town in the cartoon is based on it!

Which is why it’s so brilliant. Disney theme parks go to a lot of trouble to manufacture their dream, but walking round Rothenburg you’re in the real thing. Though it’s a slightly unreal experience. I walked around the town, poking bits of the walls, checking the wooden beams weren’t made of plastic, pinching the waitresses to make sure they weren’t robots. There was a little chair outside our room that looked like one of the Seven Dwarves had made it (see picture). Alongside the beauty of the fixtures and fittings, the town has the cheek to be placed atop a hill overlooking a comely forest and river.

Sometimes, with a tourist attraction, you only need to visit during the day to get the vibe; DO NOT DO THIS WITH ROTHENBURG! It’s pretty during the day, but it’s utterly magical at night. We did the old ‘lamplighter’ tour. It’s free (you can tip at your leisure). A few German towns do them and they are a way to make sure you’ve seen everything a place has to offer. It’s the kind of crap I usually avoid, but we did it here and I’m glad we did as the dry, laconic guide had me in stitches.

You can climb to the top of the town hall, if you have no fear of heights, and take in the view from the shaky, rusty, cast iron platform on the top. My wife assured me the view was great. I preferred to remain in the tower gibbering with fear. It’s how I deal with these things.

Try to stay in the town centre if you can. I’m sure there’s a very reasonable caravan site a few miles away, but treat yourself and spend a few extra bob. The town has plenty of good restaurants (though I find German cuisine a bit limited) but they make up for that with superb beer as usual. It’s not a place to take kids as there’s not a lot there for them to do; unless they’re very well behaved. They might quite like the place if you let them play on their phones. Adults tend to spend their time ambling round, just taking in the views from the walls and saying ‘Ooh that’s nice’ to one another. It’s on the ‘Romantic Road’ tourist route and it is indeed romantic.

We flew to Munich and travelled to Rothenburg by train. You don’t need to feel intimidated by the language issue; the train system is logical and reliable. The taxi drivers are sound and fair.

Well, I thought it was brilliant. The only issue is that it’s not the kind of place you’d visit without it being a part of another journey. Many people do the ‘Romantic Road’ trip, which takes in other towns that are probably similar to Rothenburg. I wonder if it would be cutesy medieval overkill? We went on to Hohenschwangau to see Neuschwanstein Castle. There are several other routes you could take through Bavaria. There’s plenty to see. In fact, there’s too much to see unless you’re on a pretty long trip. Rothenburg is great, go there, but only as part of a longer itinerary.

If you liked my blog, there’s every possibility that you’ll like the comic novel I’ve recently published. As much as I enjoyed teaching, and respect those who do the job, there’s plenty to laugh at. I spent 30 years giggling 😊. It’s a bargain at £2.21 for the Kindle! Click on the image for the Amazon link.